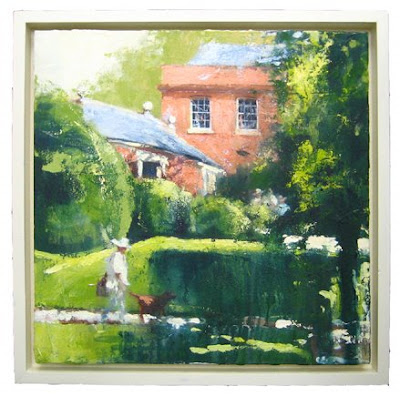 It's been a funny ol week here at HQ. Nothing has gone to plan or followed its natural course. Which is ok but tricky to manage. Many moons ago I would have been put out, nowadays I let things hang, be patient and use the unexpected time productively. I've been making frames and extra training in Photoshop, some drawing and too much thinking. Josh has been having extra coaching too...He's now proficient in jumping through hoops of fire, fetching his own tea and a refined brest stroke has been developed to a rather good standard.
So, I've been beefing up skills which I'll benefit from in the very near future...and it's all been rather good fun.
I take my wonderdog just about everywhere ( even though he's really keen on Kennels..) and he often joins me when I go out sketching or just rambling around. Above is a celebration of the fact that he shares my space..at Project K with theartistformallyknownasProut.
Acrylic on canvas Image size 56x56cm

Galleries who currently stock my work